Nick Chubb is a senior running back at Georgia. He is a complete back with stud potential. Chubb can run in between the tackles and has the speed to run outside. He is a downhill runner with some elusiveness. He hasn’t been known for making guys miss downfield on long runs but he does have some good patience at the line of scrimmage waiting for a hole to open. During his freshman year, Nick Chubb backed up Todd Gurley after Gurley’s ACL injury. He was so good he made people forget about Gurley.

Chubb’s sophomore year started off great until he tore his ACL and missed the remainder of the NCAA season. He returned his junior year, but didn’t seem like the same player. His explosiveness and lateral agility were not the same. Right now in his senior year, Chubb is starting to look like his old self. Prior to his ACL tear, he was a force to be reckoned with. He still shows good burst and acceleration, and his explosiveness and speed are coming back to what they were, but he still isn’t trying to juke defenders.

Chubb is far from the best running back coming out of college this year but he is in the upper echelon of running backs. He isn’t the best receiver and only catches balls when the plays break down. Chubb also has the “Injury Prone” label. He has good straight line speed but it sometimes takes a while for him to get fully going. Chubb still has a lot of work to do before the NFL draft to get his stock to rise more. 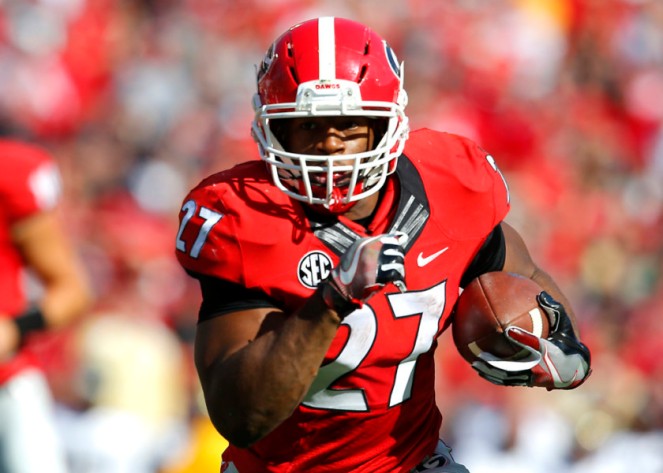 Overall Nick Chubb has what it takes to be a great NFL running back. He shows a lot of potential on short yardage downs, and has the speed to rip a nice chunk of yards from time to time. He is a powerful runner and loves to make contact with defenders at the second level. Great vision and patience at the line are some of his best traits. His NFL comparison is CJ Anderson. Both players have a very similar style, running in between tackles and bouncing off defenders to get positive yards. Anderson and Chubb also have great balance and feet after contact.  Chubb should be a solid running back in the NFL and if he can remain healthy the sky is the limit for him.

View all posts by Nick